A new report by The Public Good Projects (PGP) details how automated accounts, or bots, likely generate more than half of all Twitter traffic about vaping and tobacco products, often targeting minors and promoting misinformation about e-cigarettes.

The report, which was funded by The Nicholson Foundation, found that bots consistently insert pro-vaping message in anti-smoking Twitter conversations or promote misinformation regarding e-cigarettes. Additionally, some bot-generated messages expressly accuse scientists of hiding the truth, and seek to refute and discredit information spread by public health organizations like the Centers for Disease Control and Prevention and the Food and Drug Administration, among other key players in public health. 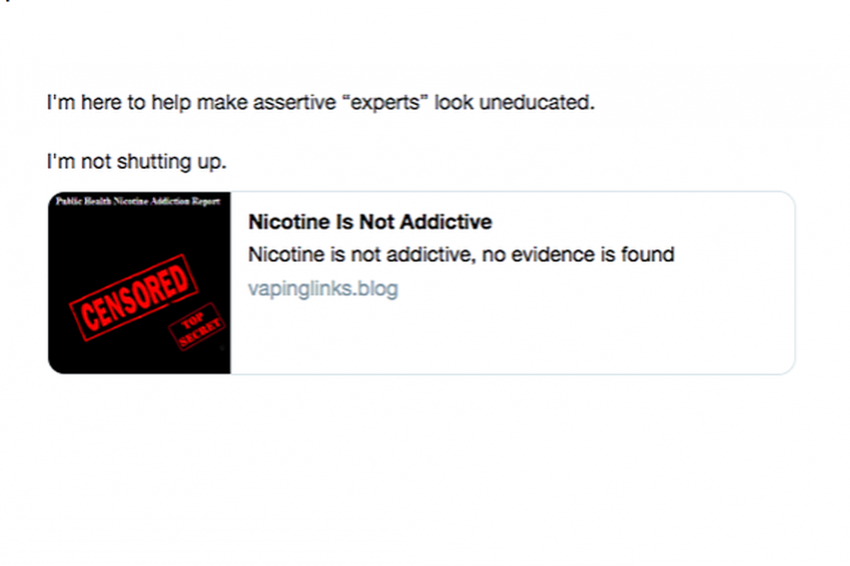 In this groundbreaking study—the first national study to document the enormous scope of the national bot conversation regarding e-cigarettes and tobacco—PGP researchers examined 1,288,378 twitter messages posted between February 1, 2019 and June 1, 2019. They found that nearly 80 percent (about 1.5 million) were posted by suspected or highly likely bots on Twitter. Bots commonly reference the importance of quitting smoking, but a deeper examination shows that a majority of these messages encourage transitioning from cigarettes to e-cigarettes or vaping. At face value, bot messaging can appear to be anti-tobacco, anti-smoking, and pro-health. However, what appears to be messaging highlighting the transgressions of the tobacco industry may actually be pro-vaping content generated by bots.

Read a Wall Street Journal Article on the Report

More In This Section